A new partnership in 2015 between Janet Holmes a Court Collection, Alcoa Mandurah Art Gallery and the Stretch Arts Festival, a selection of vibrant textiles from the collection focused on the art of storytelling by artists through their work. Many of the artists were aboriginal women from Warburton and had taken part in workshops with artist Sujora Conrad to learn to skills in the creation of large scale felt works. 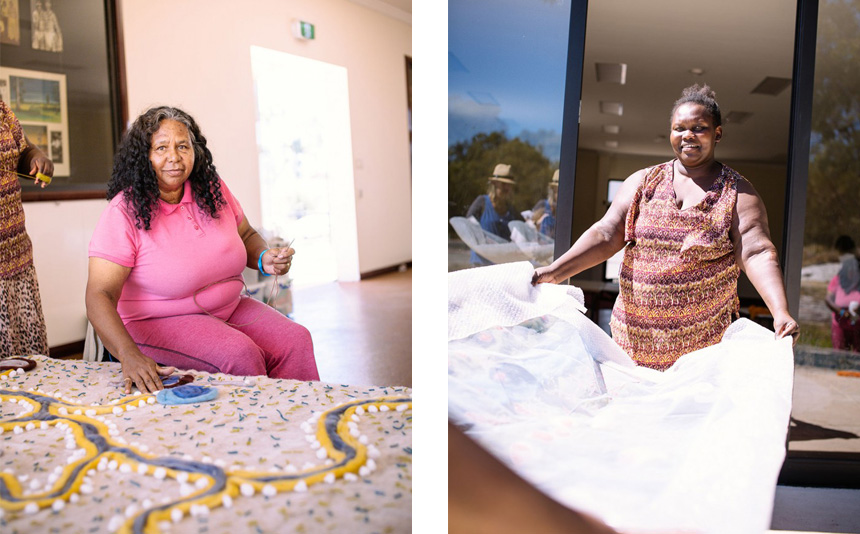 Sujora Conrad was invited to come to Mandurah to run a series of workshops with  local aboriginal women, in response to this concept of ‘sharing stories’ through large scale felt works. The workshop was held at the Murray Districts Aboriginal Association in March 2015, and 5 women took part. Gloria Kearing, Karrie-Anne Kearing, Sharree Kearing and Catherine Kenyi. The final artworks were exhibited along-side the works from the Janet Holmes a Court Collection, and created a strong sense of pride and accomplishment with the women who took part. 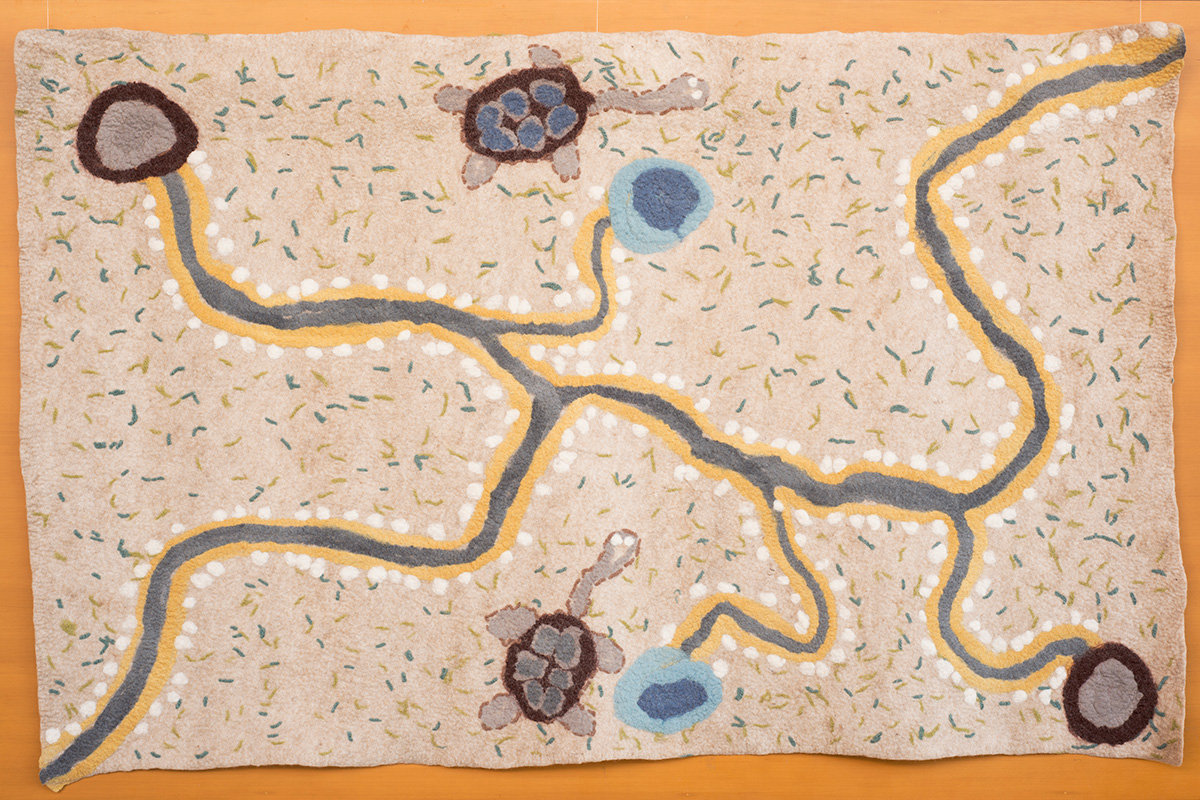 “It’s about our travels to fresh water holes and how we traveled to the estuaries, getting crabs and fish. It’s about life… And survival. The turtles are my totem. I believe we survive because of the turtles. The white dots that line the pathways are the spirits of my ancestors who had died and were waiting by the river for their family/friends before they went along… I believe they still travel the same pathways today.” “This piece represents my family as we are today and will be together always.” 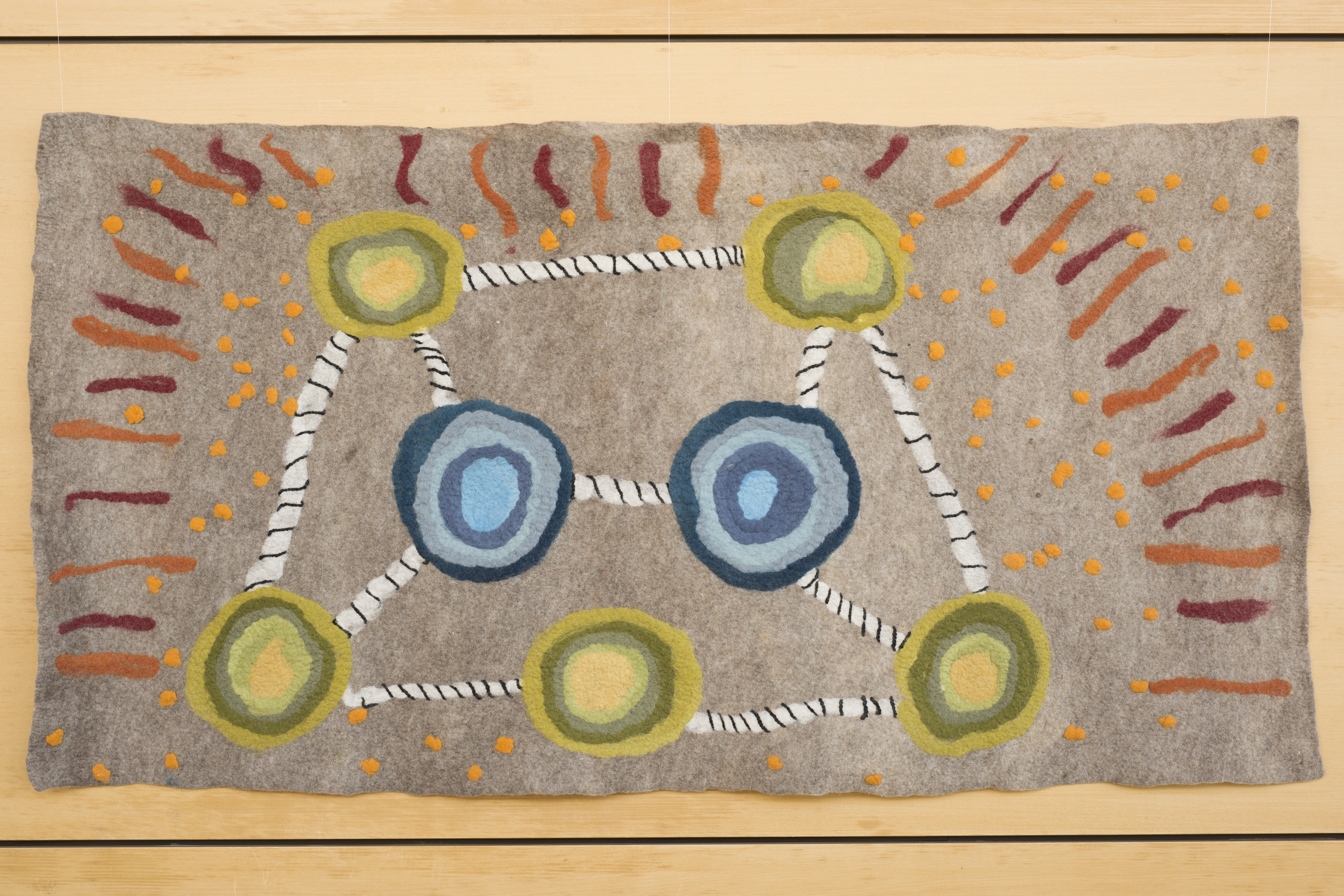 “This artwork represents my family, two boys, two girls, me, and two new Koolingas. We are all one moort. The white lines represent our strong personal and spiritual connection to each other.” “This artwork represents family. Myself and my children: Keiren, Michael, Anthony, Jurrell, Navaeha. I did it based on sport as we are an active family and we do sport all year round. We swap between basketball and football and I play basketball and netball. I think sport is important as the biggest problem in our culture is health – disease, heart problems, kidney problems, diabetes… and I think a way to start changing ways is sport. And if you’re naturally talented I don’t think that should go to waste.” “I was born in 1976. I left my country, Uganda in 1986 and ran to South Sudan. There was many problems between South Sudan and North Sudan, so my mother said I should run. She said I was young and she was old, so I should get away and it didn’t matter if she died. I left with my aunty. In 1989 my mother left for the Congo. We ran again to Central Sudan 1993 and in 2003 we went to Egypt. It was hard living in Egypt. I was working from 6am to 6pm  looking after another families children, and when I got home my own children didn’t recognise me. In 2004 my husband and my two children and I moved to Australia. I have another four children now who are Australian, I am a single-mum, and we live in Pinjarra. My mother is still in Africa.

I used to reply on my mother a lot when I was young, but through all this I have learnt how to be stronger and how to stand up for myself. I have been running from place to place my whole life.”